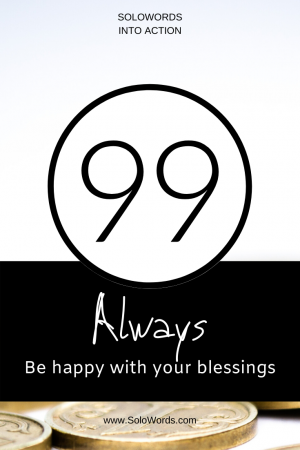 Thankful into action. Are we always happy and thankful for what we have, or are we most of the time bittered and complaining about what we don’t have?

How conscious are we of all our benefits or in other words, all our blessings?

A year ago, I listened to a story by Jorge Bucay called El Circulo del Noventa y Nueve (The Circle of Ninety-nine.) From that moment, I started to be more aware and thankful for what I have and less worry or unhappy for what I don’t have.

Here is the story and I hope it have on you the same impact it had on me:

The Circle of the Ninety-nine

In a country not far away, there was a very sad king, who had a servant who was always happy and cheerful. Every morning, the servant woke the king up, smiling and humming happy songs. There was always a smile on his face, and his attitude towards life was calm and cheerful. One day the king asked him:

“Servant, what is the secret?”

“What is the secret of your happiness?”

“There is no secret, Your Highness.”

“Do not lie to me. I have commanded to cut heads for offenses less than a lie.”

“My Majesty, I have no reason to be sad. Your Highness honors me by allowing me to assist you. I have my wife and my children living in the house that the court has assigned us, we are dressed and fed, and also His Highness rewards me from time to time with some coins that allow us to give ourselves small tastes. How not to be happy?”

“If you don’t tell me the secret right now, I will command to cut your head” said the king. “No one can be happy for those reasons you have given.”

The servant smiled, bowed, and left the room. The king was furious. He could not explain how the servant lived happily like this, wearing used clothes and feeding on the leftovers of the courtiers. When he calmed down, he called the wisest of his advisors and asked:

“My Majesty, what happens is that he is outside the circle.”

“Outside the circle? And that is what makes him happy?”

“No, Majesty, that is what doesn’t make him unhappy.”

“Let’s see if I understand: Does being in the circle make us unhappy? And how did he get out of it?”

“What circle is that?”

“The circle of ninety-nine.”

“I really don’t understand anything.”

“The only way for you to understand would be to show it with facts. How? By making the servant entering the circle. But, Your Highness, no one can force anyone to enter the circle. Although if we give him a chance, he will possibly enter by himself.”

“But wouldn’t he realize that entering the circle means his unhappiness?”

“So, you are saying that he will realize the unhappiness that will cause him to enter that ridiculous circle, and he will do it anyway?”

“That is right, Majesty. If you are willing to lose an excellent servant to understand the structure of the circle, we will do it. Tonight, I will pick your Majesty up. You must have prepared a leather bag with ninety-nine gold coins.”

That night, the wisest advisor and the king slipped to the courtyards of the palace and hid next to the servant’s house. The wise man put in the bag filled with ninety-nine gold coins, a paper that said: “This treasure is yours. It is the prize for being a good man. Enjoy it, and don’t tell anyone how you found it.” Then. He put the bag in the front door of the servant’s house, knocked on the door, and run to hide with the king.

When the servant opened the door, the wise man and the king were spying on him. The servant grabbed the bag and read the note. He shook the bag and heard the metallic sound of the coins. He pressed it against his chest, looked everywhere and closed the door.

The king and the wise advisor approached the window to see the scene. The servant had thrown everything on the table, leaving only one candle, and emptied the contents of the bag. He could not believe his eyes: a mountain of gold coins! The servant touched them, piled them up, and lit them with the candle. He put them together and then scattered all of them. He played with them, and then he began to make stacks of ten coins. One stack of ten, two stacks of ten, three, four, five stacks of ten … until he formed the last stack: nine coins! His gaze swept the table first, then the floor and finally the bag.

He put the last pile next to the others and confirmed that it was lower.

Once again, he searched the table, the floor, the bag, his clothes. He moved the furniture but found nothing. On the table, as mocking him, a glowing mountain reminded him that there were ninety-nine gold coins.

The king and his advisor looked through the window. The servant’s face was no longer the same. He had a frown and tense features. His eyes looked small, and his mouth showed a horrible rictus. The servant collected all the coins, put them inside the bag and hid it in the wood looking everywhere to make sure no one saw him. He took paper and pen and sat down to make calculations.

The servant thought that if he added his salary and that of his wife, he would raise the money in seven years. It was too long but it was worthy. He started thinking on different ways to save. Maybe he could take any extra food they had left over into town and sell it. If they ate less, they could sell more. Sell, sell, what else could he sell. Why so many winter clothes? Why more than one pair of shoes? In four years of sacrifices, he would reach his one hundred coins.”

The king and the wise advisor returned to the palace. The servant had entered the circle of ninety-nine.

During the following months, he continued with his savings plans. One morning he entered the royal bedroom knocking on the door and grumbling.

“What’s wrong?” asked the king in a good way.

“Nothing,” replied the other.

“Not long ago, you laughed and sang all the time.”

“I do my job, right? What else does His Highness want, also to be your clown and juggler?”

It was not long before the king fired his servant. It was not pleasant to have a servant that was always in a so bad mood.

Here is a question for all of us:

Are we or have we been in the circle of ninety-nine?

In my opinion, the message of this story is not that wanting to have more is bad. It is about not letting our desire for more make us blind and forgetful of all the great things we have. It is about appreciating, being happy, and counting our blessings every time we complain about something. It is about being thankful.

I know that during tough times, it is hard to see our blessings because we can only focus on what is going wrong in our lives, but it is during those times when we have to do everything we can to get away from the circle of ninety-nine.

We all have too many things to be thankful for. Those things are represented in the ninety-nine coins of this story. Let’s be happy with every single one of them, and if we want more, it is fine but always smile and be happy with what we have instead of unhappy for what we don’t have.

I am thankful and happy with my ninety-nine coins. What about you?

Did you find this useful?

Get this FREE Printable Design to remind yourself to be THANKFUL and be happy with your blessings. 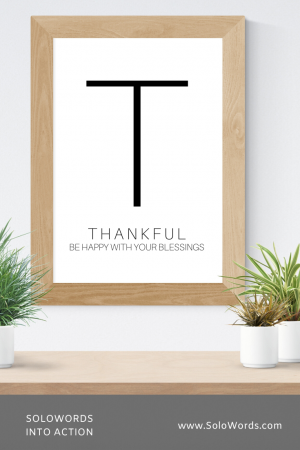 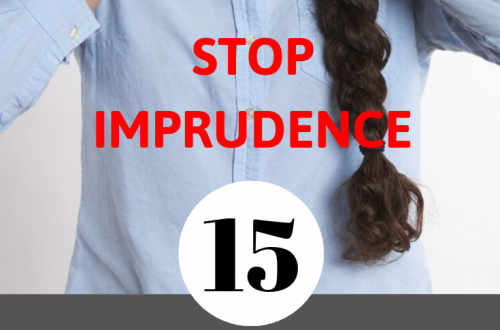 Stop imprudence: 15 questions to ask ourselves to be more prudent 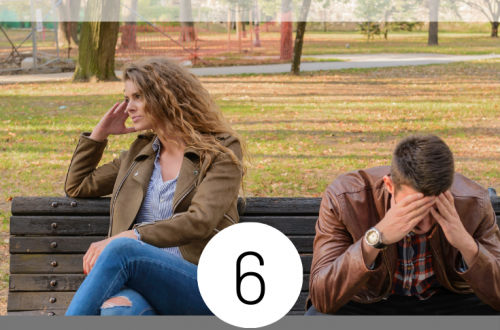 Discussing or Fighting? 6 Tips to have a better discussion and avoid fighting 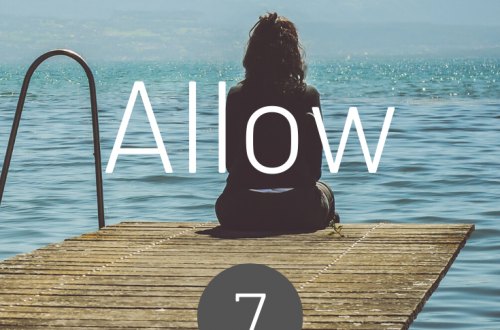 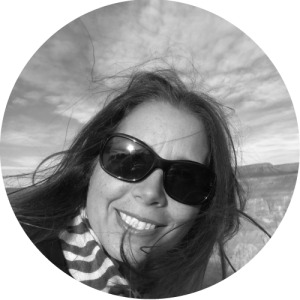 Welcome! I am Eliana, and I am very happy to meet you. I am challenging myself to put words into actions. Would you like to join me? Here you will find tips and ideas to put more action into our lives. Learn more…

Never miss a word to put into action plus get access to special FREE DOWNLOADS of “SoloWords into Action” Printable Wall Art.